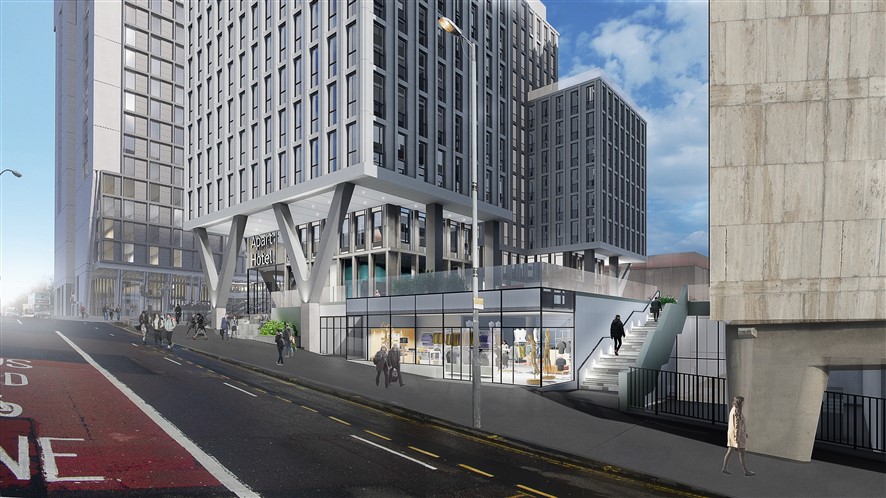 Plans to transform the city’s iconic college tower, dubbed the Met, into a hotel with leisure and grade A office space are set to become a reality.

Glasgow city council has granted developers Osborne & Co detailed planning permission to convert the 11-storey tower into a 260-bed hotel with grade A office for up to 1,200 people.

The redevelopment of the 1960s B-listed building on North Hanover Street will also offer 25-23,000 sq ft of retail leisure, food and drink space.

Osborne & Co development director Will Hean said: “Achieving planning consent comes at a critical time in the real estate market which continues to be challenged because of the coronavirus pandemic.

“Despite this, we are committed to investing significantly in Glasgow as we recognise the strength and diversity of the Glasgow economy. Glasgow’s tech sector in particular will be significant as the economy works its way back to strength.”

Tower set to be tech magnet

The building lies in the city’s innovation district close to the University of Strathclyde’s technology and innovation centre and the Inovo building which have attracted a host of tech firms.

Osborne & Co plans to demolish an existing ‘podium’ building facing Cathedral Street to make way for the hotel, which would connect to the Met Tower via a landscaped plaza.

A flexible double-height auditorium space is to be created below the plaza which could also suit a market hall, co-working space or suite meeting rooms and theatre-style conferencing facilities. This would link to the reception level of the tower and will have its own separate entrance on North Hanover Street.

Glasgow’s College of Building and Printing was opened in 1964 by Labour prime minister Howard Wilson and was designed by Wylie Shanks Architects.