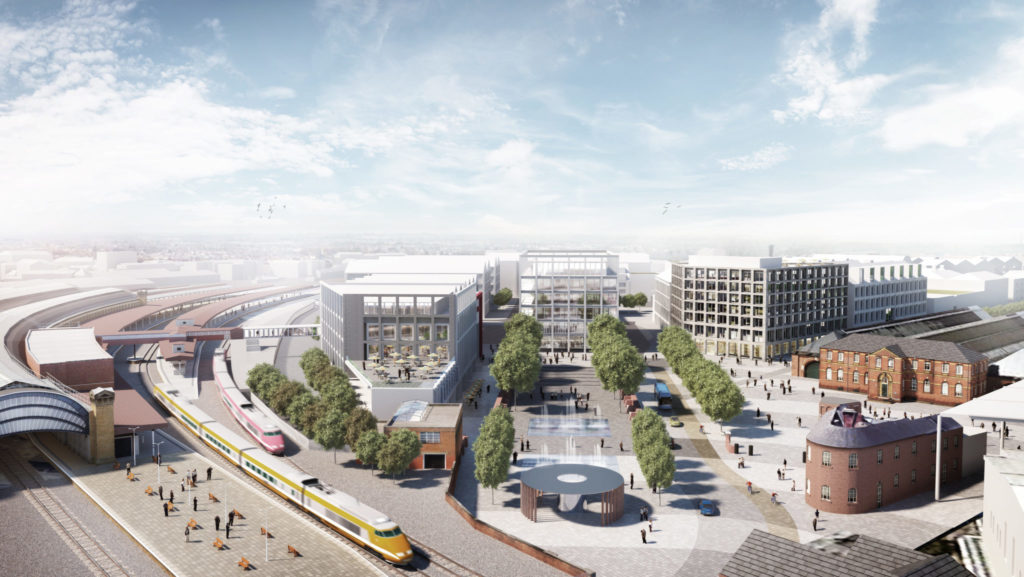 One of England’s largest brownfield regeneration projects York Central has gained government funding for a connecting bridge and access road moving the project a step closer to realization.

Up to 3,705 homes and up to 1.2m sq ft of commercial development space is set to be built on 45 hectares of brownfield land near the city’s National Railway Museum.

York City Council leader Cllr Keith Aspden said: “The funding is a vital step to unlocking a £1.16bn boost to our economy and delivering a new generation of better-paid jobs and hundreds of affordable homes, at a time when York needs it most. The scheme will also set new standards for sustainable living and clean growth, utilizing brownfield land in the heart of the city.”

It is hoped the new homes will help meet the city’s housing needs and grow their economy by 20 percent. About 80 percent of the commercial space will be earmarked for A grade offices as well as enhancing the setting and access to the museum.
Prime minister Boris Johnson has said York would be a front runner for the relocation of the House of Lords up north.
A ‘reserved matters’ planning application for the first phase has already been submitted to the city council for a new main road entrance and a bridge over the East Coast mainline. New cycling and pedestrian routes and improved drainage to provide critical landscaping for the start of a new public park are also planned.
York Central set to take nearly two decades to complete
Homes England and Network Rail want to push forward preparations for the project, which gained outline planning permission last year, so work can start on site in 2021. It’s estimated the scheme could take between 15 to 20 years to complete.
Homes England interim chair Simon Dudley said: “This investment is a clear signal of the government’s commitment to leveling up across the country by providing much-needed homes and employment space in York. The confirmation of funding provides that market with some much-needed certainty around a major strategic site at a time when it is planning ahead to recover from the pandemic.”
Investment in the York Central project was first announced in the March 2020 budget and the city council and partners have put together a £155m funding package to kick start the project.
York is set to benefit from the high-speed rail link, H2, with existing track connecting to the East Midlands hub. This means travel times to Birmingham would be more than halved taking just 57 minutes and London would be one hour and 24 minutes away.
Brokers Hank Zarihs Associates said property development lenders were keen to back housebuilding in York because it’s an attractive place to live. Two years ago, the city, which has a population of just over 200,000, topped The Sunday Times best place to live because of its mix of heritage and high-tech.