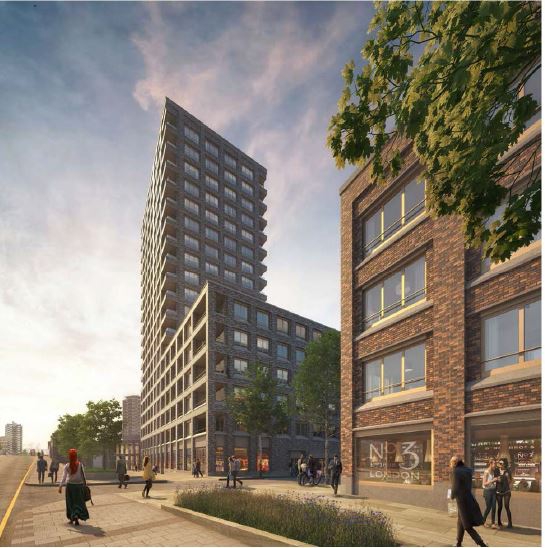 Development Loans News:- An ambitious scheme to build 323 new apartments in Stratford, East London has been given the green light by Newham Council.

The £27.5m estimated cost of the scheme will comprise five towers ranging from two to 19 storeys offering 117 one-bedroom, 102 two-bedroom, 103 three-bedroom and one four-bedroom flats. The development will also include shops covering 1,045 sq metres of floor space with  52 spaces for car parking.

Proposed development in prime spot for accessing the City

Existing buildings would be demolished on the 1.71 hectacre site which is near Plaistow tube station in Stratford. The area is also next to two grade two listed buildings – Willow Cottage and the Coach and Horses pub.

MacCreanor Lavington Architects have drafted the plans for owners and developers London Newcastle who are marketing the site.

Funding for the scheme will come from the private sector. Property finance experts Hank Zarihs Associates said they would be available to help potential developers with sourcing property development loans and construction loans.

“This is a well located site just 30 minutes from London’s financial quarter. It’s in a lively part of London with excellent communications which has really come into its own since the 2012 Olympics,” said Hank Zarihs chief executive, Shiraz Khan.