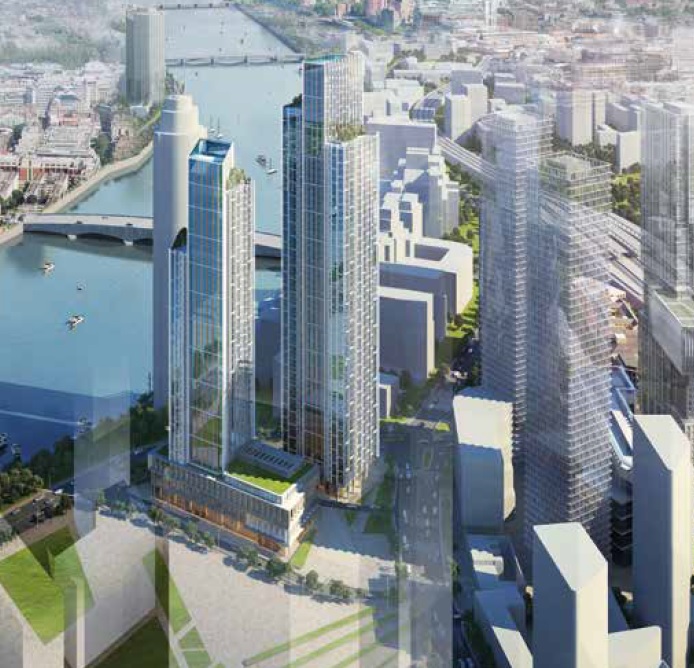 An official application has been submitted by Wanda Dalian for the construction of Twin Towers at Market Towers, 1 Nine Elms, South Lambeth, London, SW85NQ. This is a privately funded Brownfield Site project, which will involve demolition of existing infrastructure on the land and the construction of new development and twin towers. The application has been awarded subcontract, but it is still pending detailed approval.

The project will begin in January 2017 and it will be completed over a period of 42 months in January 2021. Once developed, the structures and the project will cover a floor area of 27276 square meters and a site area of 8400 square meters. 4 structures of 58 storeys high will be created, featuring 491 residential units. 200 hotel beds will be developed for this project, and it will provide 52 parking spaces for the residents and customers. The entire project will consist of a five-star luxury hotel, residential apartments, retail units and general offices.

London Borough of Wandsworth will be the associated developer for this project. Kohn Pedersen Fox (International) PA and Montagu Evans LLP will be a part of this project as the lead architecture firm and the primary planner respectively. Martha Schwartz Partners will take the position of the lead landscape architecture firm, while the role of Quantity Surveyor will be filled by Arcadis Head Office. Sweco, AKT 2 and Climate Consulting will provide the services of Mechanical and Electrical engineering consultancy, Structural engineering consultancy and Sustainability consultancy.

Shane Lincoln of Second London Wall Project Management will join the development as the project manager, Osra Project Limited will be the CDM Coordinator. McGee Group Limited has been awarded the demolition subcontract, while the groundworks and electrical subcontract were awarded to Balfour Beatty Group Limited Head Office and T Clarke Group PLC respectively.

The project’s developers and investors can easily avail capital from Hank Zarihs Associates for making their infrastructure goal success and obtaining high ROI.