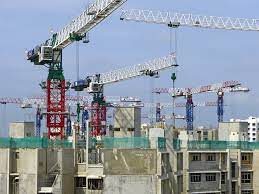 UK construction activity boomed in March with the purchasing managers’ index reaching 61.7 – the highest reading since the second half of 2014.

This was a sharp rise on February’s 53.3 figure and significantly above the 50 no-change status with housebuilding the best performing category at 64 – the fastest growth since July 2020.

Chartered Institute of Procurement and Supply group director Duncan Brock said: “This upturn led to a significant boost in hiring levels with the fastest upturn in job creation since December 2018 offering a clear sign that companies are feeling more positive in planning for new builds and refurbishments of current properties.”

Strong activity increases were also seen in commercial construction, 62.7, and civil engineering, 58, in March, the highest index readings since the second half of 2014.

There were also reports of a boost from major infrastructure projects and mobilisation of delayed initiatives in hospitality, leisure, and office development.

Growth projections were the most upbeat since June 2015, reflecting confidence in the UK economic outlook, the improving pandemic situation and pent-up demand.

Hank Zarihs Associates said lenders had noticed that requests for development and refurbishment finance were buoyant.

But higher demand for construction products and materials has contributed to longer wait times. Around 41 per cent of the index survey panel reported longer delivery times from suppliers in March, while only one per cent saw an improvement. Supply constraints and logistics issues were commonly reported by construction companies, especially for imported items.

The Construction Leadership Council, CLC, is advising builders to plan ahead as shortages for products and materials are expected to intensify over the next two to three months.

“All users should plan for increased demand and longer delays, keep open lines of communication with their suppliers and order early for future projects,” said the CLC’s product availability working group.

It pointed out that not enough timber was being produced and that other countries such as America and China were paying more to secure supply. Plastics, cement and aggregates, steel, roof tiles, bricks and imported products such as screws, fixings, plumbing items and sanitaryware are all scarce.