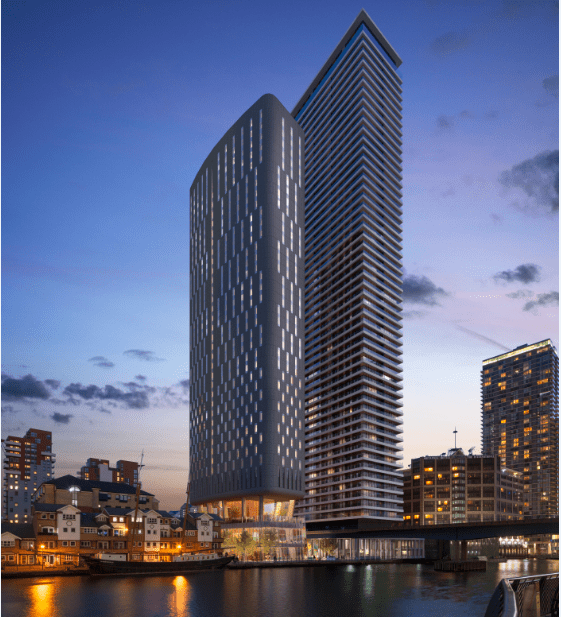 Bridging Finance News:-Rockwell has lodged an application with Tower Hamlets council to redevelop a three-storey office building on South Quay and build 279 flats and a 400-bed hotel.

The scheme will also include improving access to underused spaces underneath the Docklands Light Railway and Admirals Way, enhancing the pedestrian experience along the waterfront.

The developer said the tower, overlooking Canary Wharf, would be consistent with the height of neighbouring buildings and those currently under-construction in the area.

Rockwell’s planning and development head, Jonathan Manns, said: “We are excited to transform the currently vacant building into a landmark mixed-use development.

“This application follows extensive engagement with the local community and, drawing on inspiration from New York’s ‘highline’, the proposed public realm responds directly to the feedback we received from our consultation events.”

In 2014 Tower Hamlets council refused plans for a 68-storey tower of apartments and offices on the Quay House site.

Jobs boost is another plus

The new development will create employment for local people generating 300 jobs during construction and up to 230 full-time equivalent posts in the new hotel and serviced apartments.

Rockwell has partnered with real estate investment and development business Firethorn Trust to deliver the new scheme with Simpson Haugh & Partners acting as the architects.

Firethorn Trust partner, Peter Mather, said: “These redevelopment proposals will maximise the potential of this fantastic location in Canary Wharf. The proposal combines high quality design with significant benefits to the local community, including a substantial number of new jobs and exceptional improvements to the public realm.”

Rockwell was founded in 2015 by Donal Mulryan, who was a founding director of Ballymore Properties UK and went on to set up West Properties in 2002.